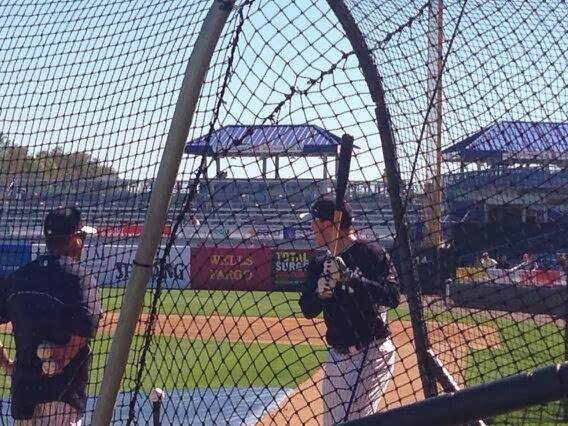 (Teix in the cage.  Courtesy of Andrew Marchand)

Pitchers and catchers are in camp and working out, and some of their position player teammates are already on site starting their spring work but not the full complement.  Wednesday is the official report date for the rest of the position players who were invited to Spring Training, so in keeping with the theme from last week's "Report Date Prepper" series, let's delve deeper into the 2 remaining roster groups that will be arriving and participating in team workout activities in the next 48ish hours.  We'll start with the infield today.

P.S.- if you missed any of last week's posts, here they are.  Starters, Relievers, Catchers.

Mark Teixeira- The first of 2 infield staples looking to bounce back from injury-affected lost seasons, Teix is one of the guys who's already in Tampa and gearing up to return to game action.  He's reportedly been doing light fielding and hitting drills, and according to most beat writers' Twitter feeds he was taking BP today.  Teix declared over the weekend that he wants to play 150+ games this year.  I think his coaches and all Yankee fans would be happy with 120.  What remains to be seen is what kind of power he'll have less than a year removed from major wrist surgery.

Brian Roberts- The current replacement for the departed Robbie Cano, Roberts will hold that job for as long as his body lets him.  He's been limited to 192 total games over the last 4 seasons, and at age 36 the odds are against that trend reversing in 2014.  But if he is somehow able to stay healthy, there might be enough natural hitting skill left in him to make him an above-average player.  If he's healthy and getting on base at the bottom of the order, it will be a bigger boost than people may realize.

Derek Jeter- The second of the injured holdovers attempting to come back, The Captain announced last week that this will be his swan song and I think I speak for every Yankee fan out there when I say we're all rooting for it to be a good one.  Jeter got a regular offseason workout in, so his legs should be in much better shape than they were at this time last year.  He's also been at the Tampa complex for some time working on his hitting and fielding, and all signs point to him having a regular ST.  Still, approaching the big 4-oh, Joe will have to monitor his health and manage his playing time accordingly to keep him at his best over the long haul.

Kelly Johnson- Originally signed as a super sub for the bench, Johnson has been forced into the starting third base job after the Yanks decided not to pull the trigger on the Marks Reynolds and Stephens Drew of the world.  His 18 career games there don't give much to go on in the way of predicting how he'll do defensively, but his track record of above-average power from the left side should make him a 2+ WAR player.  Even that would be a huge upgrade from all the non-A-Rod production the Yanks got at third last season.

Brendan Ryan- I admittedly didn't think my post about the Yankees regretting signing Ryan for 3 years all the way through.  Defensive value like the kind he provides is hard to come by, and backing up someone who's as poor a defensive shortstop as Jeter is makes Ryan a very important part of this year's roster.  Expect him to get at least 50 games at shortstop and possibly some late-game defensive caddying when it makes sense to pull Jeter.  If he can replicate what he did with the bat in his short 2013 Yankee stint, he could be another 2+ WAR player himself.

Scott Sizemore- Coming off 2 straight ACL tears and surgeries, Sizemore has missed a lot of time since his career best 2011 seasons.  He's still working his way back into optimal game shape and has been seen at the Tampa complex doing hitting and fielding drills with a big knee brace on.  While his health prospects are iffy, Sizemore has a better-than-good chance to crack the roster based on his patience, decent power, and right-handedness.

Eduardo Nunez- I cringe at the idea of including Nunez in this group, but the Yankees didn't cut bait on him when they added all these other bodies this offseason and his tenure as a multi-year Yankee will give him an advantage over the rest of his competition should Sizemore go down.  By now everybody knows the deal with Nuney.  He can't hit and he can field even less.  There's really nothing else to say.

Dean Anna- Traded for and added to the 40-man on Rule 5 Draft day, Anna has an impressive MiL track record that's never been enough to propel him into a regular Major League role.  His patience and contact skills make him an ideal utility IF on paper.  His lack of pop, speed, and standout defensive skills make him somewhat less attractive than Ryan or Nunez.

Russ Canzler- A sneaky candidate to steal a roster spot based mainly on the team's needs at first base.  Canzler offers similar right-handed power to Sizemore with the added benefit of knowing both infield and outfield corners.  Kelly Johnson is the unofficial backup first baseman right now, so if Canzler hits enough in camp to impress the coaching staff, he could finally get over the Quad-A hump and earn himself a regular bench role.

CoJo and JoPi are fringe prospects at best who aren't on the 40-man, so they're most likely looking at early cuts when the team doesn't need them for split squad games anymore.  Solarte and Wheeler are Quad-A utility types who are only going to get serious looks at Major League jobs if multiple guys above get hurt.  Expect them to be either Triple-A roster depth or DFA candidates later in camp.

** Coming up tomorrow (or Wednesday, I haven't decided yet)- The Outfielders. **
Posted by Unknown at 3:00 PM