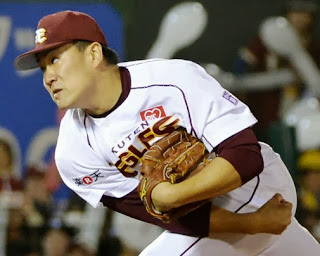 
On Saturday, Tanaka threw 160 pitches in a complete game loss - his first loss since August 2012 - in Game 6 of the Japan Series.  He then came out of the bullpen yesterday and threw 15 more pitches to close out Game 7 and give his Rakuten Golden Eagles (great name BTW) the series championship.  175 pitches in 2 days would make most MLB pitching coaches keel over and die, but the closing appearance yesterday was apparently part of Japanese baseball tradition of having the team's best pitcher record the final out of the series.  As it was with Yu Darvish, it will be interesting to see how much concern that heavy workload and Japanese pitching management style differences in general generate about Tanaka now that teams have more time to wait and evaluate him before submitting a posting bid.

The latest news and delay on Tanaka's posting eligibility allows for the perfect segue into this week's major theme at AB4AR, free agents.  I haven't done any free agent profiles yet, and now that almost all of them will be officially out there for the taking in less than 24 hours it seems like the perfect time.  Each day this week I'll profile one of the Yankees' top free agent targets, starting with Tanaka later today.  If you aren't on board with the idea of adding a 25-year-old ace-type pitcher who didn't lose for over a calendar year to the next handful of Yankee rotations, hopefully you will be later this afternoon.
Posted by Unknown at 8:00 AM