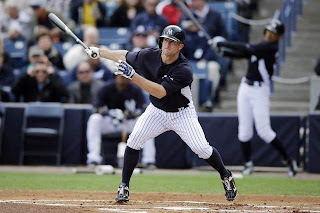 
What We Know- They'll Be a Good Defensive Group

Maybe not as good as they could have been now that the plans to swap Gardner and C-Grand in the outfield are being scrapped, but this is still shaping up to be the strongest defensive outfield the Yankees have had in some time.  Ichiro Suzuki can still cover ground out there and still has an above-average arm; Granderson is still a good athlete despite his reading and route taking deficiencies; and Gardner is one of the best defensive outfielders in all of baseball.  Having him and Ichiro on the corners should help mask some of the problems that Granderson can create on balls in the gaps, and both Gardner and Ichiro are capable of playing all three outfield positions if needed.

The anticipated decline in offensive production this season puts pitching and saving runs at a premium.  The Yankees are equipped to do that from a personnel standpoint in the outfield, but how much will that matter with the collection of pitchers they have?  CC, Hiroki, and Andy are all groundball pitchers, and Nova can be when he's locating his fastball.  Mo gets a lot of groundballs, Logan too, and Joba and D-Rob both have it in them to generate a fair amount of GB contact when they're command is on.  The only real flyball pitcher on the team is Phil Hughes, and over the course of a full season there might not be a lot of runs saved and wins created based on better outfield defense behind one pitcher.

The Gardner-C-Grand-Swish outfield of the last few seasons was one of the more balanced outfields in baseball.  Between those three, the Yankees had power, speed, on-base skills, and above-average defense. The loss of Nick Swisher and replacement with Ichiro, while adding to the speed and defensive strengths, did lessen the versatility of the group.  For starters, the Yankees no longer have a right-handed everyday outfielder, which could become a problem if their starters struggle against LHP and their bench OFers don't produce.  Ichiro also doesn't offer nearly the on-base strength that Swish did because he doesn't take a lot of walks.  There's still a lot of skills in play with this group, just not as diverse as the skill set used to be.

What We Don't Know- How Valuable They Can Be

That lack of diversity and well-roundedness in group skill set could be what limits this group's potential.  As strong as their individual strengths are, they do also have some pretty glaring weaknesses that can and most likely will impact their production.  Ichiro's lack of walks, for example, does minimize the value of his speed because he has fewer opportunities to use that speed on the basepaths.  Granderson's power is a great weapon and a much-needed one in this lineup, but his strikeouts can be crushing and his poor defense dropped him down to a 2-WAR player last season.  And Gardner, who lives on his walks, speed, and great D, can be rendered relatively value-less when his playing style leads to him getting injured.  If everything clicks, the Yankees could have at least three 3-4 WAR guys on their hands.  If everything doesn't, they could be looking at some serious problems.

What We Know- The Yankees Need Brett Gardner

Now more than ever.  We all saw how one-dimensional the offense became last year when Gardner got hurt, and this year's lineup has significantly less of that one dimension.  Gardner's ability to work counts, draw walks, and create scoring opportunities with his legs makes him an ideal leadoff candidate against RHP and gives Joe the option of lengthening the lineup when everybody is healthy by batting Jeter second.  His Gold Glove-caliber defense allows the Yankees to not miss a beat defensively while C-Grand is out and acts as a security blanket for Granderson defensively when he does return to the lineup.  Gardner was a 6-WAR player in 2010 and a 5-WAR player in 2011.  A return to that kind of production is critical for the Yankees if they want to overcome their loss of power.

What We Don't Know- What They'll Get From Curtis Granderson

And that loss of power could be even greater if C-Grand doesn't come back swinging the big stick he has over the last two years.  His injury is "just" a bone break, so there shouldn't be too much worry about lingering effects once it heals, but the loss of Spring Training time could prove to be very problematic.  Granderson is a streaky hitter as it is, and he got no real reps in camp before going down with the broken arm.  He's going to play in rehab games and he'll be able to take as much time as he needs to get ready, but there's no way to replicate the reps he would have gotten had he not gotten hurt.  His entire spring routine was halted before it could even start and now Granderson will come back having not faced Major League pitching in seven months.  For a hacker like Curtis, that has me pretty concerned.  He may be back on the field by May, but what if it takes until June or July for him to get back in a groove?  That's half a season of subpar production that the Yankees can't afford from one of their most dangerous middle-of-the-order bats.